When I was initially diagnosed and stage IV hadn’t yet been confirmed I was a woman on a mission, I was going  to beat this bastard. I had books coming out of my ears and I devoured them all, books about food and nutrition, alternative therapies, exercise, you name it I read it. But then I realised there was something missing, something I was craving that I hadn’t yet found in anything I read.

Thankfully I finally found it in Bernie Siegel’s wonderful book, there have been many others since that I hope to share with you. Incredibly that winter as I waited for my bone scan and the devastating news that was to follow I felt calm and at peace, cocooned in the love of my friends and family. When Stage IV was finally confirmed early February 2013, terrifying as it was, I think  I was in a much better frame of mind to deal with it.

This little book recommended by Dr Don Brennan( thank you Don) an ayurveda practitioner, was my aha moment. I was reading everything I could get my hands on, but nothing was really hitting  the spot, till I found this. Written by a cancer surgeon, this is a book that gives me hope, despite its title it doesn’t speak about miracle cures, it doesn’t set traditional medicine against alternative. It doesn’t wreck my head by making me choose between one thing or another.

He can sometimes seem a bit arrogant and overly harsh on those in the medical profession. Some of you might find it a bit touchy feely, a bit Oprah (note the cynic in me!). For me it confirms so much of what I have already learned and now believe, that there are so many variables to our wellness and maybe we  have more control of our illnesses than we think. I  know that for some this might be a concept too terrifying to accept but for this crazy control freak it has given me the strength to keep getting up every time this rotten b…..d knocks me down. It’s all about the love X 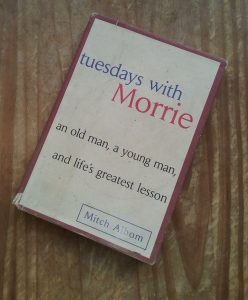 This little gem sat on my shelf for a couple of years, till one lovely spring day in 2013 when I picked it up and read it in one sitting. It’s about  the lessons learned by one man from his dying mentor. I’d been feeling a bit spiritually challenged, a bit stuck, like something was preventing me from moving forward. This book was just the gift I needed, those words just resonated with me and set me on my path to exploring death, my death. Yeah I know I’m a bit of a nutter, but the way I saw it, If I faced it, I could park it and get on with living my best life. Again, this one is all about the love X 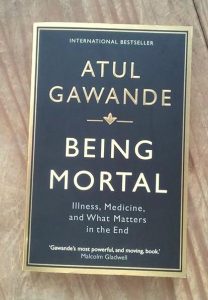 ” The ultimate goal, after all, is not a good death, but a good life – all the way to the very end”

Ok this incredible book needs to come with a WARNING, it is seriously graphic in it’s descriptions, definitely not for the faint hearted. It almost, almost, made me grateful that I won’t have to endure old age, phew, it’s no picnic. It doesn’t just deal with death from ageing but also premature death from illness. It addresses many of my concerns, is it possible to avoid suffering?  when do I stop searching for something to prolong my life? will I be able to let go when the time comes, will my family?.What can I do now, if anything to make it that bit easier at the end. Yep all the tough stuff. Call me a masochist, but I am nothing if not prepared. x 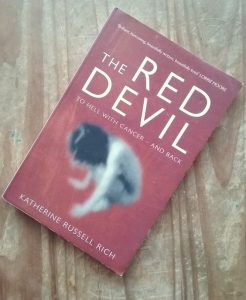 ”The cancer had devoured two vertebrae. A third collapsed when an orderly bringing me back from a scan fumbled and dropped me onto the mattress.”

Another one that needs to come with a WARNING, this lady (who sadly passed away in 2012 after a 25 year battle with breast cancer, something to aspire to) is one tough cookie, she seriously doesn’t mince her words.This was a tough, gritty read, I didn’t always agree with her, I’m not sure I even liked her, but she did make me laugh at times, and I couldn’t help but admire her. I  found her brutal honesty (and I mean brutal) a refreshing antidote to the many sanitised accounts of breast cancer I have come across. In 2016 when I nearly died, was as weak as a kitten and thought this was it, thinking of her and how she had managed to give death the finger so often kept me going. Haha, She hated Bernie Siegel by the way.